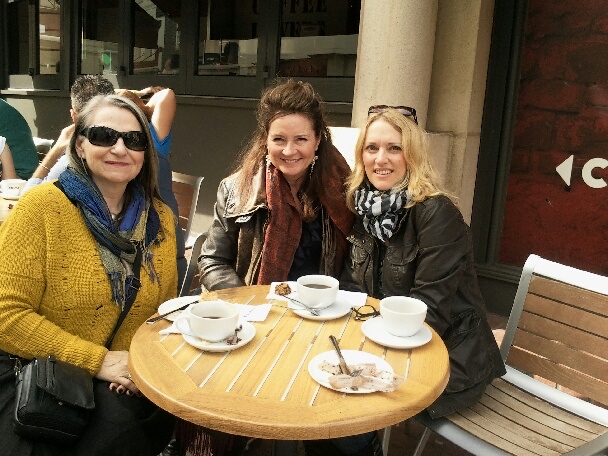 I’m fascinated by the concept of time and memory. My work has always been my journey of the everyday, in the landscape, marking time. My recent investigations involve post memory. Thinking about childhood memories…how much is remembered, as opposed to recounted memories or images?

‘post memory is a powerful form of memory because it’s connection to it’s object or source is mediated not through recollection but through representation, projection and creation, often based on silence rather than speech, on invisible rather than visible’

A themed project is a great way to stretch your practice and leave your comfort zone.

Our first project was in 2012 :
In celebration of the rich heritage and landscape
of Hertford, praesentia are exhibiting new work in response to
this theme to include drawing, painting, print-making, photography
and sculpture. Fine artist and photographer, Caryl Beach is
particularly interested in the landscape and often overlooked
evidence of human occupation. For experimental printmaker
and fine artist Sally Tyrie, the fine line and traces of nature’s
presence inspire her unique mark-making. Veronica Grassi will
explore the delicate balance in the local environment using the
mediator of stitch, soluble film and iron wire.

As my studio was located overlooking Hartham Common it seemed fitting that, as a landscape artist, I should explore this area close to home.

I made a video of the waterways that pass through and around Hertford and some large scale photographic images. Veronica’s installation explored 100 found and made objects relating to, and found in Hertford. Sally produced delicate print work again responding to the buildings and heritage of Hertford.

Our next group event followed in 2012 with an Open Studio exhibition at Dicker Mill Hertford. A large empty warehouse housed current work from all three artists and was the perfect space to create installations and large scale projections.

In 2013 it was the Centenary of the death of Alfred Russel Wallace. Following on from the Hertford exhibition this was a really inspirational research based project to work on.

Caryl Beach, Sally Tyrie and Veronica Grassi studied together at the University of Hertfordshire on the MA Fine Art course and are currently based at Digswell Arts Trust studios. Following on from a very successful show at Courtyard Arts in Hertford in 2012, which examined Hertford’s heritage, they have come together again to create work that responds to one of Hertford’s historical residents, Alfred Russel Wallace.

‘Wallace 100’ Art Trail coincides with nationwide events being organised by the Natural History Museum and partner institutions around the world to ‘commemorate the life and work of Alfred Russel Wallace on the 100th anniversary of his death in 1913’.

My contribution for this event was a video : The simple act of walking , which followed the pathways Wallace had trodden as a boy, living in Hertford, with a mocking call of the bird of paradise. The bird he unsuccessfully searched for in his explorations.

The Art Trail was very labour intensive as each venue had to be approached to take part in exhibiting our work, as well as a trail map being designed and produced, we had to make the work.

The venues who kindly supported us were:

The one day launch at Courtyard Arts and ensuing art trail was a great success and well worth all the work. This preceded an art trail the following year by Hertford Council and Courtyard Arts who continue to stage an event every year.

At various times praesentia also exhibited work at various Market venue, such as Duckpond market in Lauderdale House Highgate, and St Albans Museum, Watford craft market and St Albans Christmas Market. This was a valuable networking strategy and led to many good contacts being made, as well as a way of selling small works.

In 2015 we were delighted to be invited to exhibit at Parndon Mill Gallery with our exhibition ‘Encounters’ :

A body of new work by three artists, explores the relationship between object, memory, material and process. Whilst each artist uses different media, there is a narrative and cohesive theme to their work which has been described as ‘Fresh, fragile and emotive perspectives juxtaposing thought provoking use of multi media’.