The Hertford Art trail is now under way with works being installed around the town and preparations for the launch on Friday at The Hertford Castle.

Bebo Cafe has kindly offered their walls to display my mixed media work on all three floors. The ground floor space showing ‘A Walk along the Mere to the Martello Tower’ inspired by a stroll between the Mere and the sea at Aldeburgh a while ago, when I was fortunate in finding many interesting objects along the way as well as quite a few hag stones to add to my collection. The found objects I used in mono printing and later thought they would be a great to use in a mixed media piece describing the walk. This is the outcome:

Detail of ‘A Walk along the Mere to the Martello Tower’ 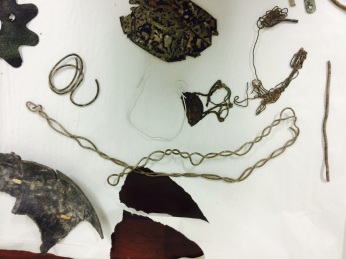 This was inspired by a whole series of photographs and observations made in the Cornish Landscape. When I started looking closely in rock formations and hedgerows along the lanes I realised how many amazing hidden places and spaces existed. Each one a brief encounter in it’s own right.

Finally I have selected a mixed media work that is also inspired by the Cornish Landscape and although it dates back a few years it relates to my present work that is exploring abstracting the landscape and playing with perspective and also captures the essence of all that is Cornwall, for me. You will have to visit Bebo to see this one!