I have admired these paintings for a number of years – having seen them in the foyer of the Charlotte Hotel in Charlotte Street. I happened to mention this to a colleague and he informed me of the artist and his whole biography! I have now discovered more of his amazing work and wanted to share it! Enjoy- I think  his work is amazing……

Particularly impressive are two of Cecil’s works in the lobby of the Charlotte Street Hotel in London alongside a Botero sculpture: 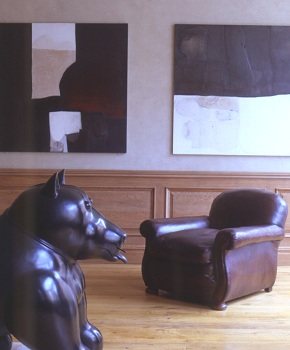 Roger Cecil was born in 1942 in Abertillery/South Wales. From 1959 to 1963 he studied Fine Art at Newport College of Art, and from 1995 to 1998 he did his MA at St.Martins College of Art. He has lived and worked in Wales for the past four decades. A BBC documentary was made on his work called \’The Gentle Rebel\’.

Sarah Bradford wrote about Roger Cecil in a catalogue for an exhibition at Gallery 27 in Cork Street London in 1999: \”He is very matter-of-fact about procedure and materials. To him painting is a very practical thing. The making is important. He brings the work to life by explaining how he manages to balance method and aesthetics. He tells of the ordinary everyday materials he uses, red oxide, polyfilla, stopping out varnish, grate blacking, and how he builds the work in layers, rubbing and scraping back, burnishing, scratching and scoring to reveal what has gone before. He rarely talks about the pictorial language which has become identifiably his and his alone, the pathways and ladders, the shapes that resemble rows of terraced houses, the scarring of the landscape, the triangle and the cross that is the piece of land at the end of the road where the war memorial stands. This is his private language. He hesitates from imposing his meaning on anyone else, preferring others to come to his work in their own way and on their terms”.

Awards: 1963 highest award from Newport College and a place at the Royal College London; 1964 David Murray Landscape Award from the Royal Academy.

Postscript: Really sad to discover on revisiting Roger Cecil on wikipedia that he died on Feb 22 2015.

Teaching the art of composition for photography.

Our round Australia trip in a TVan

My ramblings about things I felt like rambling about