I try to get to St Ives at this time of year for the Arts Festival- sadly I will not be there this year- and it’s the 75th Birthday of St Ives School of Painting!!!

I will however be at The Digswell Trust for Hertfordshire Open Studios…for those of you fortunate enough to be in St Ives…this is a must:

1938 was the year that Chamberlain attempted to appease Hitler; Daphne du Maurier published Rebecca; James Cagney and Humphrey Bogart starred inAngels with Dirty Faces; test cricket was televised for the first time ever; and the first edition of The Beano appeared on newsstands. To celebrate theSchool of Painting’s anniversary, we’re having a party. We hope you can join us for cocktails.

The St Ives September Festival has been going since 1977, to bring a diverse range of music, art, poetry and performance to St Ives. This year, the School of Painting is running a series of workshops covering everything from collage to iPad sketching, to help develop your skills or try something new. 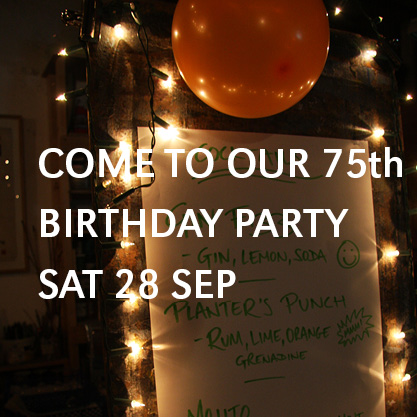